Brad Clark has dedicated his life to the modernisation of guitar making.

From his leading roles with prestigious guitar brands and working with artists such as Tommy Emmanuel and Jack Johnson, Brad’s innovative guitar pre-amps power some of the most acclaimed acoustic music performances of the modern era.

What Brad says about the system:

“Two sensors are inputted and mixed with sophisticated EQs curves using DSP tech. The preamp remains an analogue system. Four such mixes and EQs are saved, and loaded into the preamp to be recalled by the player by means of a simple scroll button on the soundhole control plate. It’s like changing gears…to suit the power requirement.

In my experience, to get serious power, there are three precepts:

• Large Super-High quality piezos. Small strips are not serious… being around 1/20th the power.
• To be effective that Power needs to be loaded up under the strings… as string pressure alone is not enough for good sound transference… And piezo strips tend to ‘flap about…’ And if you listen carefully, you can hear that effect. Especially if you are a hard player.
• And there needs to be mass on the non-sensing side: The wood of the saddle slot is insufficient, and often insufficiently flat to provide the performance I was looking for.”

Supernatural’s Discrete Power pickup comprises a special brew of brass pins which listens to the under saddle, but also the soundboard. Well EQed to the instrument, it is difficult to beat. The four stored mixes and EQs cover most venues, sound systems, PAs, and accounts for playing styles. 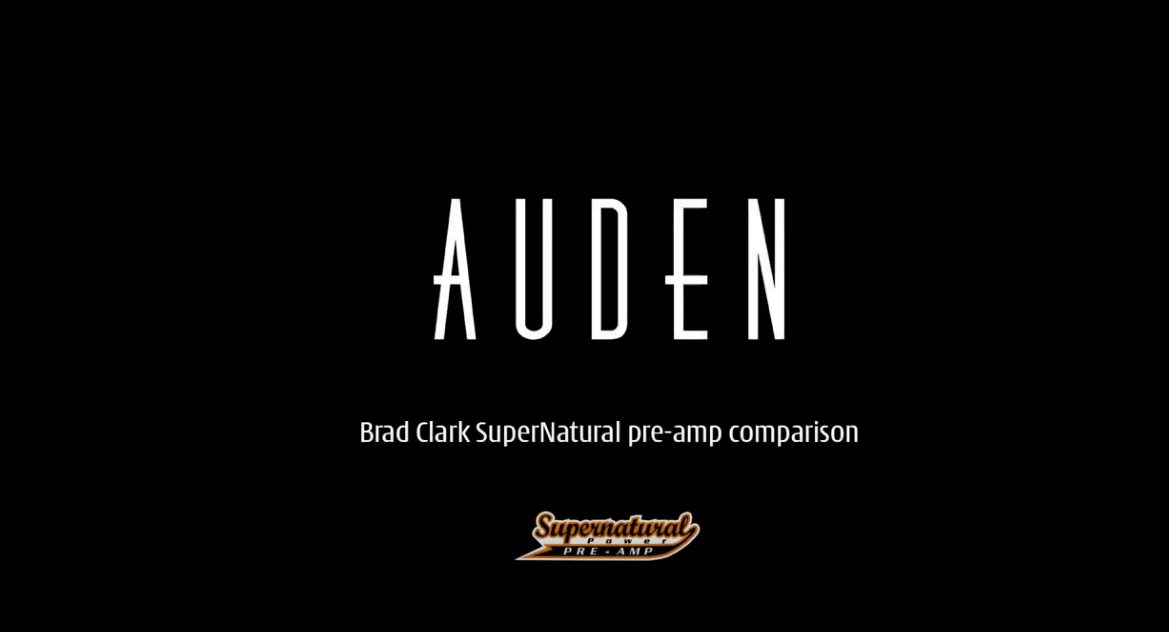 For more information on Brad Clark and the Supernatural pre-amp, visit clarkguitartech.com

The Supernatural comprises two sensors inputted into a programmable preamplifier. The sounds are “tuned” by professional musicians and pre-stored into the chip. There are four pre-sets to suit most guitars, scenarios and styles.  As a starting point, we describe them as:

Each sound is customisable with the onboard EQ so our descriptions are just a starting point from which you can explore the sounds of your guitar and your playing style.

The Control Plate is fitted in the sound hole and has the standard 3 band graphic EQ any professional expects, plus a volume control. The four sliders from left to right are: Bottom end, Midrange, Treble, Total Volume.

The push-button on the right is for selecting sound programs: a green LED flashes the numbers, flash once for sound 1, flash twice for sound 2, etc.

When the battery is running low, the red LED lights up, and there’s from 30 minutes up to several hours left depending on the strength of your battery. The battery and major circuit board (PCB) is fitted to the guitar’s heel block therefore no routing is needed in the guitar’s side.

The system is lightweight and does not compromise the guitar’s acoustic performance.

The SuperNatural Analogue system is side-mounted to the upper bout of the guitar allowing for ease of visibility and adjustability. The Analogue System features the same pre-amp, six individual under-saddle pole pieces and a face sensor that can be found in the Digital System. The Analogue System has a bass, treble and a blend allowing the user to blend the face sensor in and out.
Features

The SuperNatural Digital Microphone system features the same under-saddle tech as the SuperNatural Digital System. This is combined with a soundhole mounted condenser microphone which adds a natural air to the overall amplified sound. The Digital Microphone system is powered through DSP (Digital Signalling Process), which includes four pre-sets, each customisable through the onboard EQ.
Features

Join the Auden family to receive our regular email newsletter including latest news, details on our newest products, exclusive Auden merchandise and first hand access to our competitions.